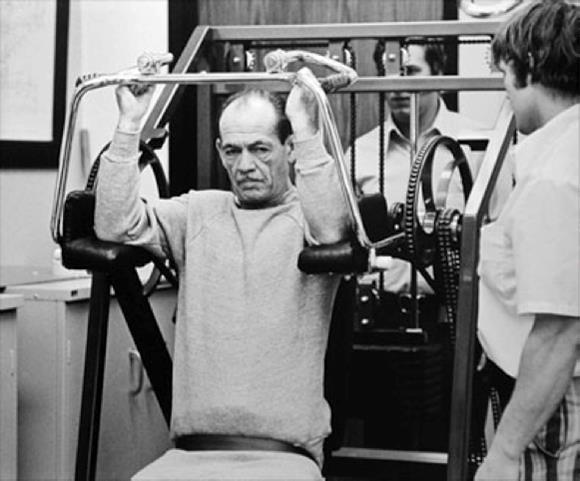 Arthur Jones was an inventor and entrepreneur whose innovative variable resistance machines helped transform the fitness industry during the 1970s. With a minimum of formal education but a maximum of imagination and drive, he became one of the most important forces in making strength training mainstream. His Nautilus line of equipment (complemented by his high intensity training system) utilized cams rather than straight-line pulleys or weights to induce an eccentric full-range of muscular motion. By 1984, with 4,700 Nautilus Fitness Centers nationwide, along with complete lines of equipment in countless schools, colleges, commercial gyms, and rehabilitation facilities, Jones' company became the largest manufacturer of exercise machines in the world.

Arthur Allen Jones was born on November 22, 1926, in Morrilton, Arkansas, scion of several generations of physicians. While growing up in Seminole, Oklahoma, he claimed to have read his father's entire medical library. In 1941, Jones dropped out of school to join the Navy and started using barbells at Vic Tanny's gym in Santa Monica. Realizing that free weights and existing machines were inadequate while training at the Tulsa YMCA in 1948, he devised a Nautilus prototype. It was not until two decades later, after pursuing his passion for flying, collecting exotic animals, and producing television shows (including the syndicated "Wild Cargo" series) that he developed a complete version, dubbed the Blue Monster, which he exhibited at the 1970 Mr. America Contest in Culver City, California. The design and principle (matched by Jones acerbic personality) were so revolutionary that they initially attracted much controversy and ridicule.

Marketing the new machines was also a challenge owing to their higher cost and general ignorance about their use and benefits. To address these concerns, Jones developed his high intensity training system which stressed quality over high volume. It required one set of each exercise to failure, working each muscle group twice weekly, slow and smooth (not explosive) movements, and an optimal range of ten to twelve repetitions. Fewer but more intense workouts was the operative principle. In 1978, Arthur initiated a series of Nautilus Fitness Seminars which helped lay the basis for the many personal training certifications that emerged in the 1980s. To test and publicize the efficacy of his machines, Jones trained or influenced numerous high-profile bodybuilders, including Mr. Americas-Casey Viator, Mike and Ray Mentzer, and Boyer Coe, as well as Mr. Olympias-Sergio Oliva and Dorian Yates. Sales of Nautilus machines skyrocketed, owing in part to the proliferation of health clubs in this era. With his company grossing $300 million annually, Jones became a multimillionaire and was named to the Forbes 400 list. In 1986 he sold Nautilus Inc. for $23 million.

Jones used the profits and sale of his extensive real estate holdings to finance MedX Corporation. Utilizing research from the University of Florida's Center for Exercise Science, he devised a new generation of machines to address lower back, neck, and knee concerns. Introduced in 1987, his breakthrough technology brought about spinal rehabilitation by positioning patients to ensure the proper muscles are targeted and computerizing their functional strength throughout the treatment. In 1996, Arthur sold MedX. He died of natural causes on August 30, 2007, but he is best remembered as a trendsetter who created exercise machines that accommodated human body structures and movements and as an entrepreneur who served as a catalyst for health clubs to become big business.