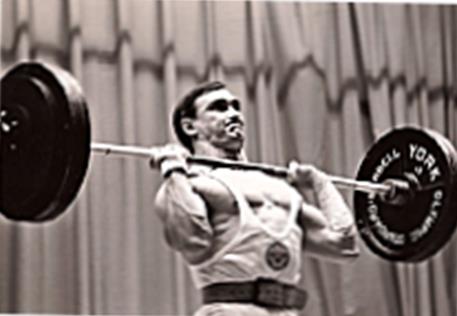 Bill Starr was a leading weightlifter during the 1960s who became a high- profile author, editor, and coach in the burgeoning field of strength and conditioning. His intimate knowledge of training and fluent writing style led to an almost cult following in succeeding decades among strength athletes and serious sport connoisseurs. Although he subscribed to many of the revolutionary elements of America's counter-culture during those turbulent years, the soundness of his thinking and advice had a wide appeal. Most influential was his The Strongest Shall Survive, Strength Training for Football, which remains a strength and conditioning classic.

William Asel Starr was born on January 12, 1938, in Harford County, Maryland. At 130 pounds on graduating from high school and too small and weak to play college sports, he joined the US Air Force. During his brief stint in the medical corps, he became bigger and stronger by lifting weights. Upon discharge, Bill completed a bachelor's degree in sociology at Southern Methodist University where he played football and became a competitive weightlifter under the tutelage of Dallas heavyweight Sid Henry. While earning a master's degree in social work at George Williams College in Chicago, Starr worked, as an ordained minister and youth director, for YMCAs in Park Ridge and Marion, Indiana.

From 1966 to 1972 Bill applied his knowledge of strength and conditioning as an editor of Strength & Health, the nation's most influential fitness magazine. Along with Terry Todd and Tommy Suggs, he incorporated many fresh ideas about training and sparked a renaissance of interest in Olympic lifting and weight training by his persuasive articles, lectures, and coaching clinics. He also served briefly as strength coach for the NFL Baltimore Colts. York Barbell, his employer, took on a new life, and Starr appeared to be heir apparent to its aging leadership. But differences with York's "old guard" over modernization, commercialism, and drugs, led to Starr's hasty dismissal. For several years, he retained a following by editing his Weightlifting Journal and various fitness publications for Joe Weider in California and Peary Rader in Nebraska. To escape the legal clutches of York, Bill settled in Honolulu in 1973 where he served as strength coach for University of Hawaii athletics. It also provided a stimulus for the accumulation of his thoughts into The Strongest Shall Survive (1976) which soon became a bible of sorts for strength athletes. The essence of his program, which would be implemented in countless lifting venues (many by Bill himself), consisted of five repetitions for five sets of the big three (bench presses, squats, and power cleans), performed on heavy, light, and medium days of the week. Its sequel, Defying Gravity (1981) was focused on how to prepare for and win weightlifting competitions.

During the 1980s Starr returned to Maryland where he became the strength coach for nearby Johns Hopkins University until 2003. Concurrently, he continued to pour out hundreds of articles on strength and conditioning that appeared in such mainstream publications as Iron Man and Milo, and when the new and exciting sport of crossfit emerged, Bill penned dozens of training articles, even as a recluse, that were eagerly devoured by readers of CrossFit Journal. Bill Starr never lost his "hippie" demeanor or outlook on life, but his expertise in strength and conditioning was never questioned. He died on April 7, 2015, in Maryland.