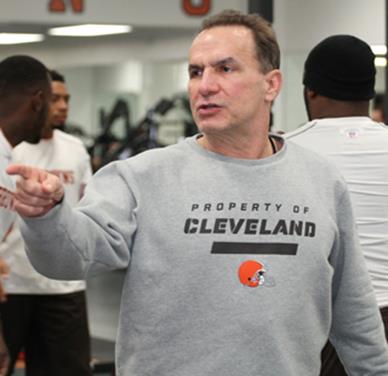 Brad Roll is a strength and conditioning coach who has mentored two generations of young athletes on the collegiate and professional levels. His knowledge of coaching was enhanced not only by his own playing experience in multiple sports but by his academic training, exposure to Olympic weightlifting, and an ability to perceive a need for qualified coaches in the burgeoning sector of sports performance. Roll played a significant role in at least three national championship teams in basketball and football in nearly four decades of coaching that included 20 seasons in the NFL.

Bradley Paul Roll was born on July 4, 1958, in Houston, Texas, one of three sons of Bill and Antoinette Roll. As a youth, he played football and baseball and threw the discus. Brad’s interest in strength and conditioning was inspired by his offensive line coach who stressed basic weightlifting movements and year-round training. After playing center at Blinn College and Stephen F. Austin State University, he became a graduate assistant at the latter in charge of off-season training. In 1983 Roll became the first full-time strength coach at Southwestern Louisiana State University in Lafayette and had the opportunity to imbibe the strength and conditioning system of Gayle Hatch in nearby Baton Rouge. This system stressed proper technique and explosive performance of the Olympic lifts which was reinforced during the summers of 1985 and 1986 at the Moscow Sports Institute and in 1987 while working with German Olympic weightlifting coaches in Leipzig. He learned how to isolate explosive parts of a player’s body and apply them to specific football movements that are safe and effective. Then at the University of Kansas, Roll contributed to the 1988 national championship of the Jayhawks basketball team, and at the University of Miami helped the Hurricanes football program capture national championships in both 1989 and 1991. His most notable Miami players included Dwayne Johnson (The Rock) who gained fame as a professional wrestler and actor, and defensive tackles Cortez Kennedy and Warren Sapp who were later inducted into the professional football hall of fame. Subsequently, Brad served as strength and conditioning coach for NFL teams at Tampa Bay, Miami, Buffalo, St. Louis, Oakland, and Cleveland, then returned to college football coaching at the universities of Southern California, Miami, and Tennessee.

As a sports performance specialist at Tennessee, Roll has combined his many years of experience as player and coach with the latest technology, utilizing the Catapult GPS Sports Science System and the Zebra Tracking System to maximize the effectiveness of his charges. Much of the secret to his success with so many teams over so many years has been his ability to stay current with changes in coaching technique and technology. He is keenly aware of the need to adapt to strength and conditioning advancements and the peculiar capabilities of each generation of athletes.

As a senior and much respected coach, Brad Roll has influenced other notable coaches. Further recognition of his expertise was his service on the executive committee of the NFL Coaches Association for thirteen years and his induction into the Stephen F. Austin State Ring of Honor. In a profession where stress and burn-out are not uncommon and coaching careers are sometimes short, Brad, through his instinct for adaptation, “just keeps rolling along.”